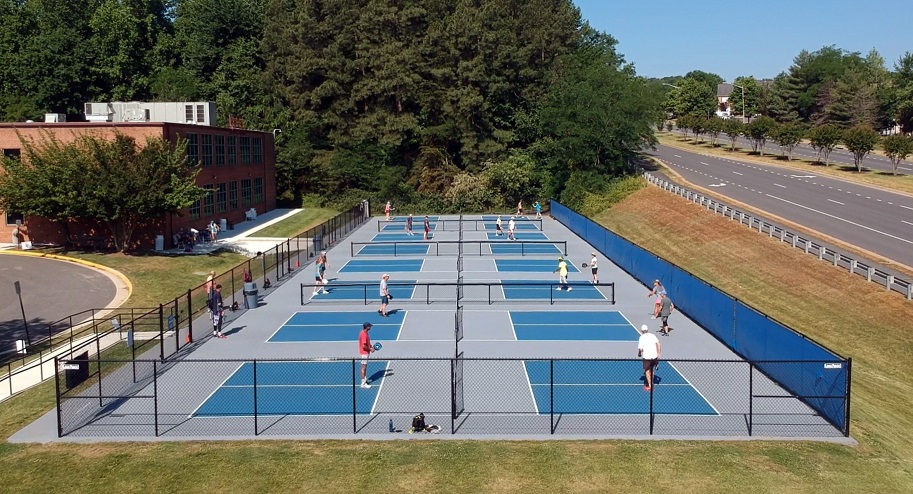 Pickleball has become the fastest growing sport in the U.S. according to the Sports and Fitness Industry Association (SFIA), with the growth of the sport surging by nearly 40 percent between 2019 and 2021. Between 2018 and 2021, the USA Pickleball Association’s membership nearly doubled, and the organization estimates that 4.8 million Americans now play the sport.

If you’re an avid pickleball player or are looking to join the fun of playing this popular sport, Prince William County Parks, Recreation and Tourism has plenty of court options for you.

If you’re not familiar with the sport, pickleball can be played indoors or outdoors, as singles or doubles. It is easy for beginners to learn but can develop into a fast-paced, competitive game for experienced players. No doubt the game has developed a passionate following due to its friendly, social nature and its multi-generational appeal.

At the A.J. Ferlazzo pickleball courts, which has become a popular place to play since it opened, you can find small groups but also sometimes upwards of 40-50 people rotating in and out to play.

Katsarelis notes that while there’s a mix of each type of player at all of the Prince William County courts, at Veterans Park you can find many social and recreational players; at Hellwig a lot of recreational players; and at A.J. Ferlazzo you can find a mix of both, as well as your more competitive players if that’s what you’re look for. At Hellwig, they host a ladies’ night on Monday evenings at 6 p.m., and a beginner’s night on Wednesdays at 6 p.m. at A.J. Ferlazzo.

No matter where you play though, he adds “if you play it twice, you’re going to be addicted.”

If you’re looking to improve your skills or learn the game as a beginner, we’re currently offering one-on-one instruction, either private or semi-private lessons. The summer session ends August 31, but spots are still available. The fall session begins September 5 and runs through December 30. A session consists of four 60-minute lessons for $160.00 or one-hour private lessons for $55.00 per person. All lessons are held outdoors, weather permitting.

To learn more or sign up for the ‘Pickleball Skills, Drills & More” lessons please contact the front desk at Veterans Memorial Park.